Why the Israel-Palestine conflict has not been solved for 73 years? Izz ad-Din al-Qassam is a Muslim freedom fighter who participated in various resistance movements against the western occupations in the Middle East including against the Italians in Libya, the French in Syria, and most importantly, the British in Palestine.

The killing of al-Qassam by the British in 1935 has inspired generations of Palestinians to fight for the liberation of Palestine from any form of occupation.

This century-old conflict has a very long and complicated history.

In 1917, the British had promised the land of Palestine to the Zionists in the infamous Balfour Declaration. 31 years later, the state of Israel was established at the end of the British mandate.

Why was there never an end to this century-long conflict? Why can’t a two-state solution peace deal succeed?

Firstly, in any such deals, a line on the map should be drawn to establish the border of the two states. The question is, where should the border be?

The Malaysian Prime Minister Tan Sri Muhyiddin Yassin stated on the 11th May 2021, that Malaysia supports the two state solution based on the pre-1967 border with East Jerusalem as the capital of Palestine.

The pre-1967 border includes the Palestinians giving Israel 78 percent of historic Palestine and only keeping 22 percent of their own land.

These illegal Israeli settlements impede the viability of the two state solution. The United Nations Security Council (UNSC) Resolution 2334 states that the “establishment by Israel of settlements in the Palestinian territory occupied since 1967, including East Jerusalem, has no legal validity and constitutes a flagrant violation under international law and a major obstacle to the achievement of the two-State solution and a just, lasting and comprehensive peace.”

Indeed, it is a major obstacle. In many preceding peace talks, Israel demanded more land from the Palestinians, citing the major Israeli settlements in East Jerusalem and the West Bank. This does not sit well with the Palestinians as they had already given up 78 percent of their land.

The continued expansion of the settlements reflects Israeli government’s lack of commitment towards peace. As recent as January 2021, Israeli Prime Minister Benjamin Netanyahu approved the building of 800 new settlement homes in the West Bank.

On top of it all is the issue of Jerusalem.

In 1980, the Israeli parliament passed the Jerusalem Law. Under this law, it is declared that “Jerusalem, complete and united, is the capital of Israel”.

In response to the Jerusalem Law, the UNSC passed Resolution 478, condemning the Jerusalem Law as it violates international law. However, Israel explicitly rejected and ignored this resolution.

This is the Gordian knot of this conflict. In fact, both sides are willing to compromise about land and other issues, but the issue of Jerusalem is where every peace talks failed.

This is best reflected in the Taba Summit 2001. The summit is said to be the closest ever to an agreement between Palestine and Israel. That being said, the issue of Jerusalem is still causing an impasse among the negotiators.

Another issue that usually trips the peace negotiations is the issue of refugees. The Palestinian refugees that were displaced by the formation of the state of Israel and the settlements should be able to return home to their land. Some of them still kept the keys to their home.

However, if after the two state solution, the refugees’ home is in Israel, would they be able to return home and become Israeli citizens?

In most of the peace talks, Israel rejects the right for the refugees to return.

The Israeli Arab population has always been viewed suspiciously by the Israeli conservatives. They were even referred to as a “demographic time bomb” which threatens the identity of Israel as a ‘Jewish state.’

Currently, the total population of Israel is 9.2 million. Of them, 6.8 million are Jews and 1.8 million are Arabs. The number of Palestinian refugees is estimated to be around 7 million. The return of these refugees home as Israeli citizens would shift the majority in Israel, and Israel would never let this happen.

Therefore, how would this conflict end? Is the two state solution still viable? At this point, nobody really has a realistic answer.

Some argued that the Palestinians should just quit resisting and just accept the Israeli occupation to prevent further deaths.

Just after 12 hours of the ceasefire between Palestine and Israel on 21st May 2021, Israeli police had thrown stun grenades and stormed into the  al-Aqsa Mosque. Israeli settlers are also seen entering the holy site. The Palestinians in Sheikh Jarrah are being barred from returning to their homes.

These actions were very much identical with prior incidents that led to the conflict escalation in the first place. Here it is again, during the ceasefire, as a direct provocation to the Palestinians.

As a Palestinian, if you resist, you’ll be bombed, like in Gaza. If you keep quiet, you’ll be evicted from your home, like in East Jerusalem and the West Bank. If you run away, your claims to your land and your holy mosque might be revoked forever, like the refugees. 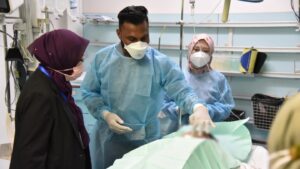