GBM: We are all brothers It began six or seven years ago when I was invited by Mdm. Ho Yock Lin, then COO of Gabungan Bertindak Malaysia (GBM), to help in their work. In those days, Prof. Badlishah was the chairman of what was then the Unity in Diversity (UID) sub-committee of GBM. They were short of volunteers and Yoke Lin invited me to serve as one in their team.

A little time went by and I had the opportunity to journey all the way to UPM in Serdang to meet up with Badlishah. Up to that point, I had not known him very well and had interacted only minimally during our sub-committee meetings.

Badlishah treated me to a sumptuous nasi kandar lunch – UPM style! We talked and exchanged ideas on Islam and Christianity and the problems in religious diversity. It was a memorable first of many interactions we were to have in days to come.

We subsequently had many other occasions to talk and exchange ideas in the many trips and gatherings we attended together at regional conferences and seminars over the years.

Jeffery Phang is very much involved in community empowerment work, having been in MyPJ for more than 10 years. I met Jeffery at a seminar in a church about seven years back when I was one of the panelists.

He was mending an exhibition kiosk on the work of MyPJ as part of the programme. Little did we know, we were all in GBM. Later, Jeffery also joined us as a member of the UID sub-committee.

Stanley was a later addition to the group when GBM decided to embark on a review of its operational structures a year ago. He subsequently became a core member of our special purpose vehicle in line with the structural revision undertaken in GBM.

Our last addition was of course Mr. Ho Khuek Hua, who was a newly minted CSO activist who was fresh from his retirement as Deputy Director-General of the Department of National Unity and Integration.

Mr. Ho, as we commonly address him due to his stature and seniority, brought with him a wealth of experience and connection to the civil service in the work of national unity.

We have benefitted much from his wisdom and insights especially when dealing with the government and its agencies. And then there was me, from the world of Christian service, having once served as a missionary and leader of the Christian Evangelical organisation that was accused of having an agenda to ‘Christianise’ the country.

Sounds ordinary, doesn’t it? No big deal, as human experience tells us we meet friends from various background at different points of our lives. But here’s a story that goes beyond the just meeting and gathering. And so the story continues.

As events unfold and perhaps the religious would say, by the will of God, the friends at various points of their lives were brought together under the organisational umbrella of GBM.

We had nothing in common, what with such diverse backgrounds and statures in life. Under the organisation, we were merely colleagues, co-workers. That is all.

But the journey of initial interaction and meetings gave us the opportunity to discover one another’s passion and aspirations. In the many meetings, over food and beverages, there came to the fore a common bond. From colleagues in an organisation, we became comrades for a common cause, i.e. national unity.

And as we became comrades for the common cause, it facilitated the means for us to dwell into each other’s convictions, our views on the things happening around us, especially with regard to GBM and the nation.

We talked, we discussed, we dissected and analysed the problems and together we attempted to find viable solutions. That sealed and made the common bond stronger.

And with that common bond, we turned from comrades to friends, good friends to say the least. I remembered we all had the occasion to attend Badlishah’s daughter’s wedding and sit together at a table specially referred to as the ‘GBM table’!

In that friendship, we came quickly to a common understanding and with it the freedom to express our opinions as to what we really feel about issues. So we laugh, we joke, we critique and we share our common desires for the nation.

What’s unique about this life experience deserving of mention is that the friends are not only from diverse professional background, but from different religious persuasions as well, each committed to their own religious dogma and ethics.

In this diversity, the friends came together as one, one in cause, one in engagement and one in relationship so much so Badlishah had on numerous times say we are all brothers, the brotherhood of humanity (there’s truth in the Quranic maxim of li ta’aarofuu).

And precisely it is this that makes this story real and meaningful. It is a story that tells how, behind the people working to forge national unity across ethnic and religious differences a reality, they themselves are a product and manifestation of unity in diversity.

In short, the characters are the microcosm of unity in diversity for the nation. In their life experiences with one another as good friends and as ‘brothers in humanity’, they come to represent what they are first and foremost and then what they seek to achieve for themselves and the nation. 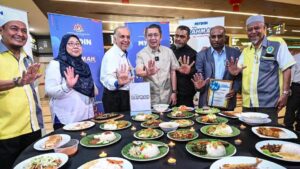